The History of Hewitt’s & Bailey & Sons 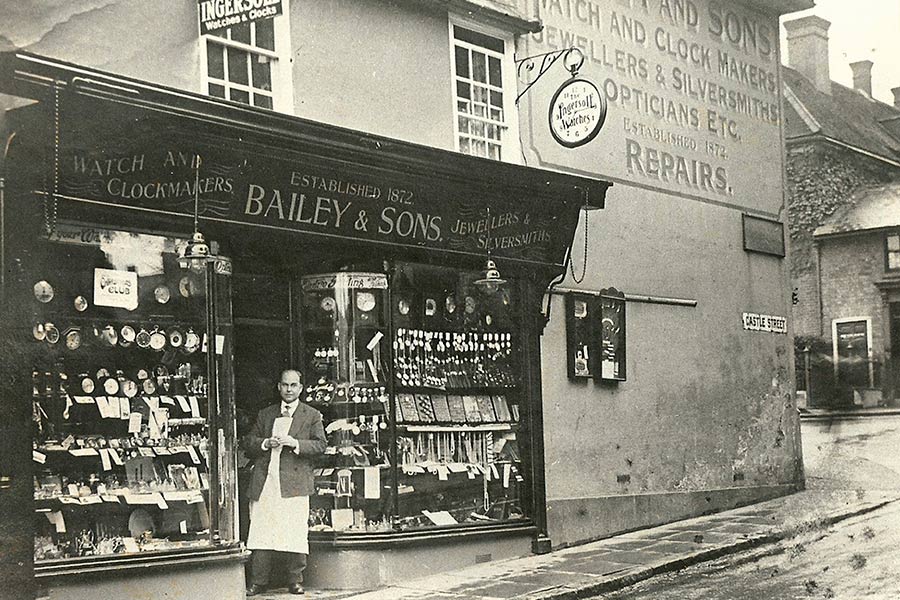 Bailey & Sons were founded in 1872 by the Bailey Family on Castle Street in Berkhamsted which was run by the father and his two brothers. 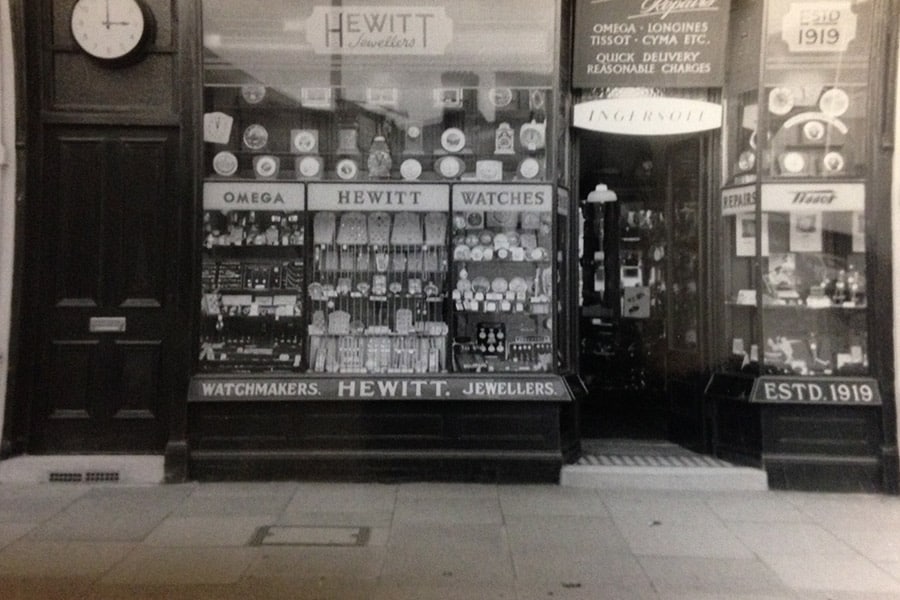 The Hewitt family business was founded in Brixton Hill, London in 1919 by Fred Hewitt and his brother Albert. Fred, who was only 20 bought lock, stock and barrel from a German businessman who had decided to retuned to Germany after the first world war.

It was a lucky start for the brothers who found the shop fully equipped and stocked with pre-war goods and they found a ready market. People were eager to snap up goods like a silver coffee pot at £12 12s 6d. 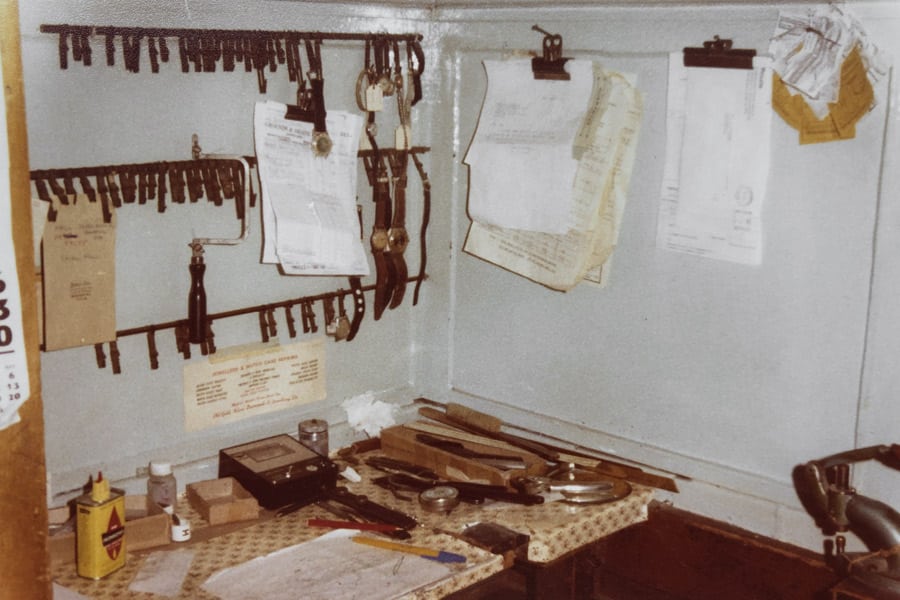 Back in Berkhamsted, Mr Sparkes became a partner within the business at Bailey & Sons. He was an expert watchmaker so he went into the Airforce as an instrument maker during World War Two but returned to run the shop in 1945. 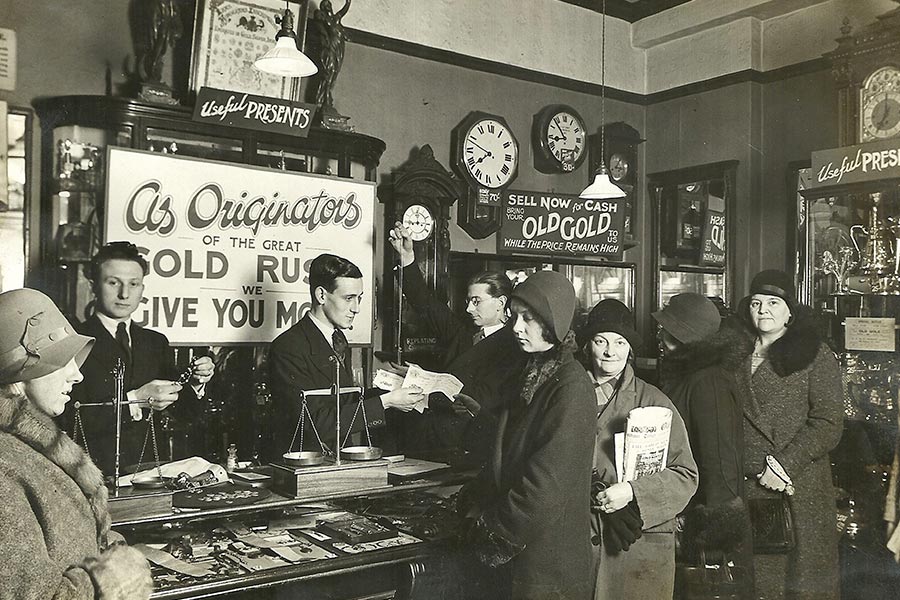 In September 1931, Britain abandoned the gold standard and the Hewitt brothers realised a gold sovereign was worth more for the gold than for its face value of 20 Shillings. They invited customers to sell their gold sovereigns for 26 shillings and queues of people rushed to take advantage of this offer. Hence, they were the originators of “The Gold Rush”.

The coins poured into the shop and Fred would use his motorbike to take the coins to the Bullion Refiners where he made one shilling and sixpence profit on each coin. 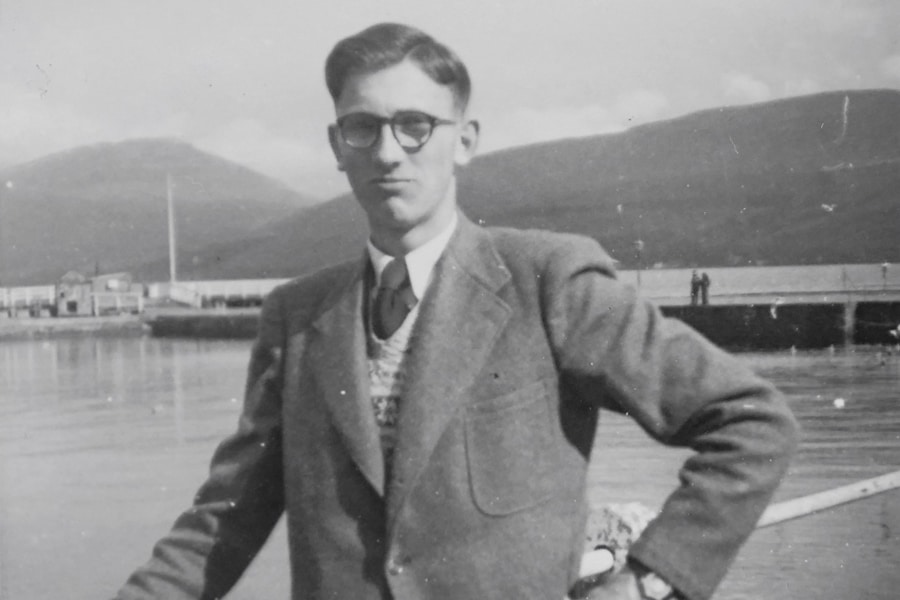 After escaping London after the Blitz the brothers opened a second shop in Amersham on the hill.

Fred’s son Ron was very interested in the trade so when he joined the business sometimes he travelled up to London on the 7.29 am train from Amersham. In those days he said it was a social occasion.

Ron married Connie in 1955. Together they had a son called Nigel. 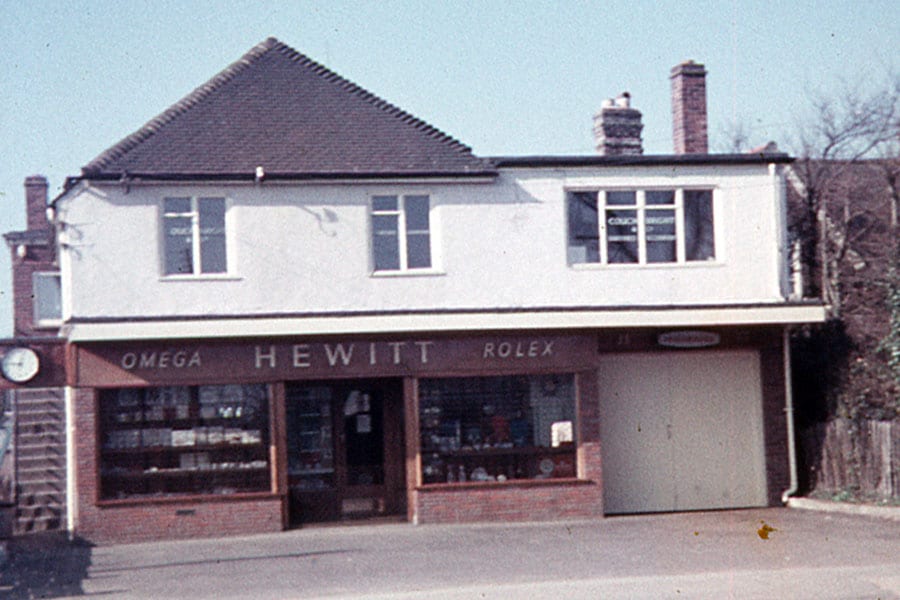 At a time where business prospects were at a low ebb for jewellers, the Hewitt family took a gamble and relocated in Amersham to Woodside Road. It was a gamble that paid off, for within a year a glimmer of a successful future was indicated by their turnover doubling so in 1964 they finally decided to concentrate on Amersham and the shop in London was sold.

Sadly, Mr Sparkes passed away in 1968 and his wife continued with the business in Berkhamsted. 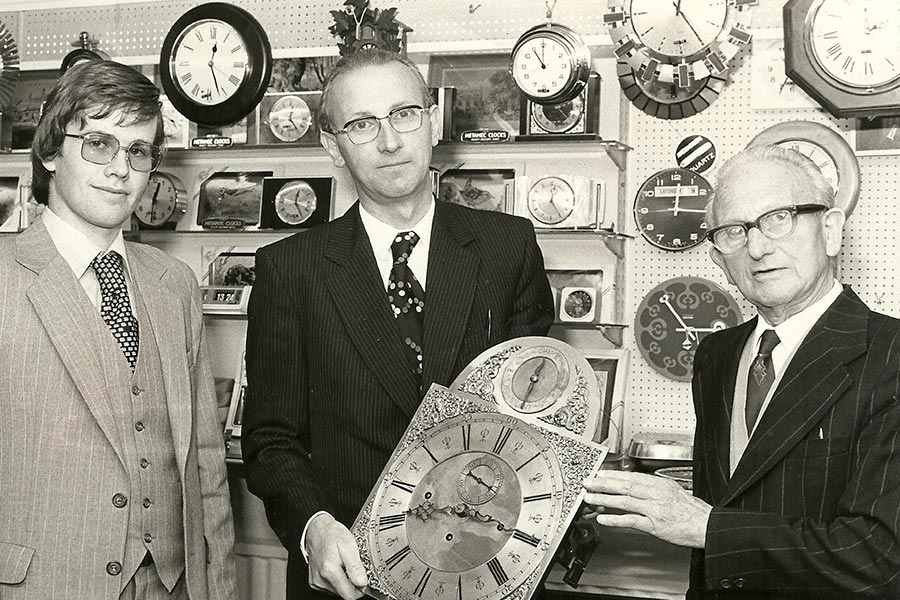 At the age of 18, Ron’s son Nigel joined the business in 1974 and by the age of 22, he had a lot of gemological knowledge through studying. Customers that were seeking advice on the selection of precious gemstones would be directed his way. 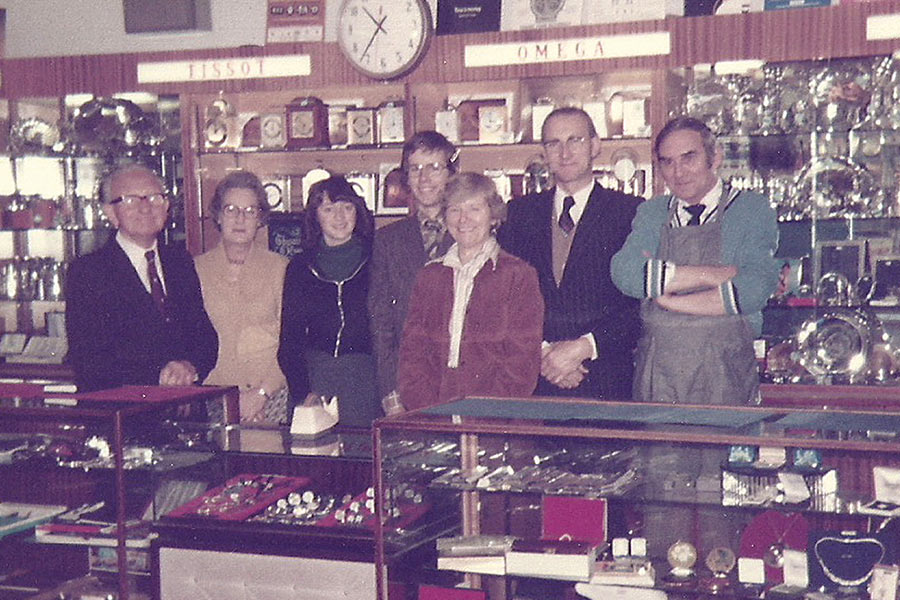 Jane joined the company as a Sales Assistant in Amersham and worked with Fred, Ron & Nigel. Although Fred was past retirement age he was always the leading force, putting in a full day’s work both behind the counter meeting customers and in the back room where he did everything from intricate watch repairs to delicate jewellery work. 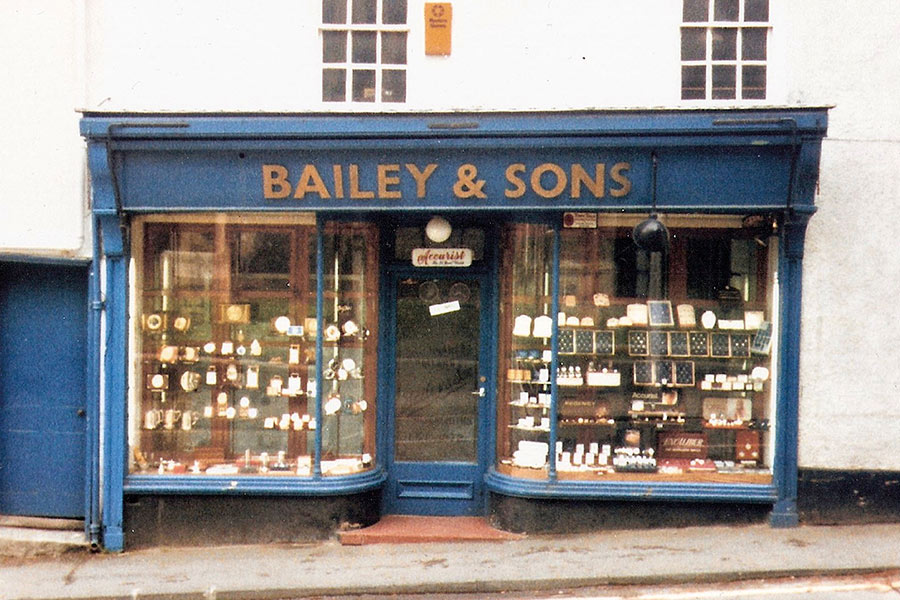 The opportunity to buy Bailey & Sons in Castle Street, Berkhamsted arose in 1981. Nigel & Jane took on the shop from Mrs Sparks and it was very run down. Nigel re-energised the shop so that within two years he had turned it into a thriving business. Ron was still running the Amersham store and he retired in 1984 and the shop was sold.

Fred continued to work until he passed away in 1983 at the grand age of 84. 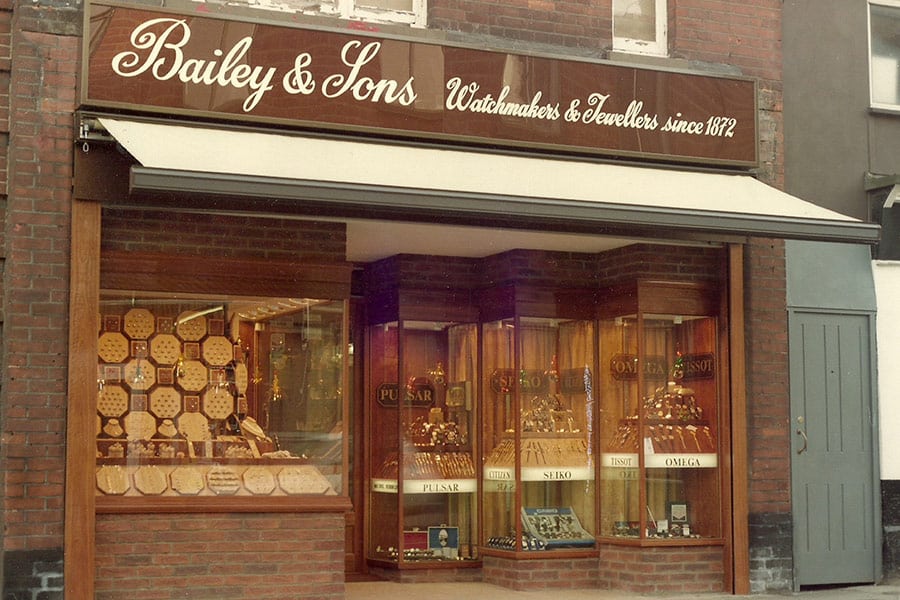 In November 1985 the move to the premises on Lower Kings Road took place. The subsequent large extension out the back, overseen by Ron enabled Nigel & Jane to expand the business and beautiful stock.

Nigel and Jane had a lot in common and after a year they got married in 1986. 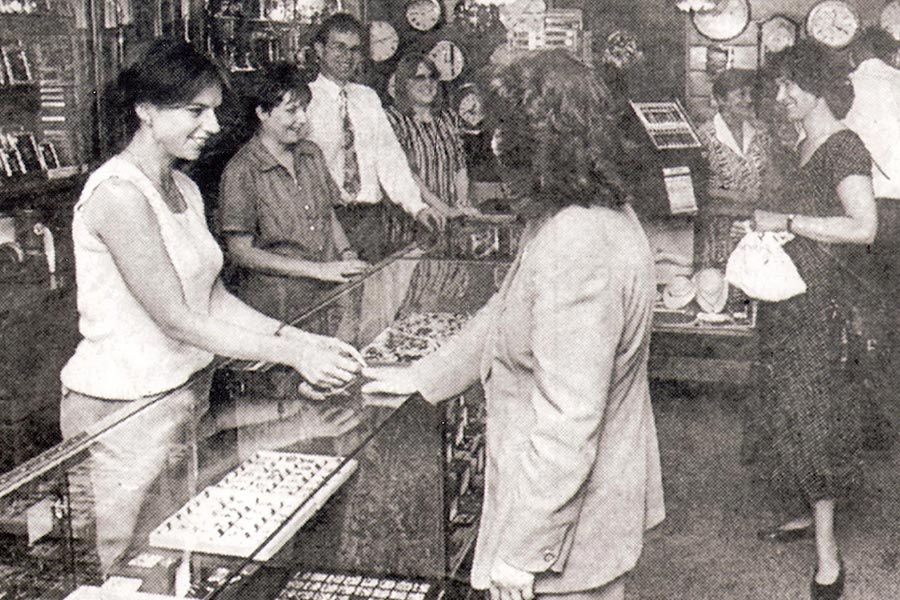 Jane left to start a family and Charlotte was born in 1989 and Miles followed three years later in 1992. The business continued to grow with an extensive stock selection and many experienced staff who were front of house. In the year 2000 business was spectacular due to the Millennium buzz and the year was filled with… 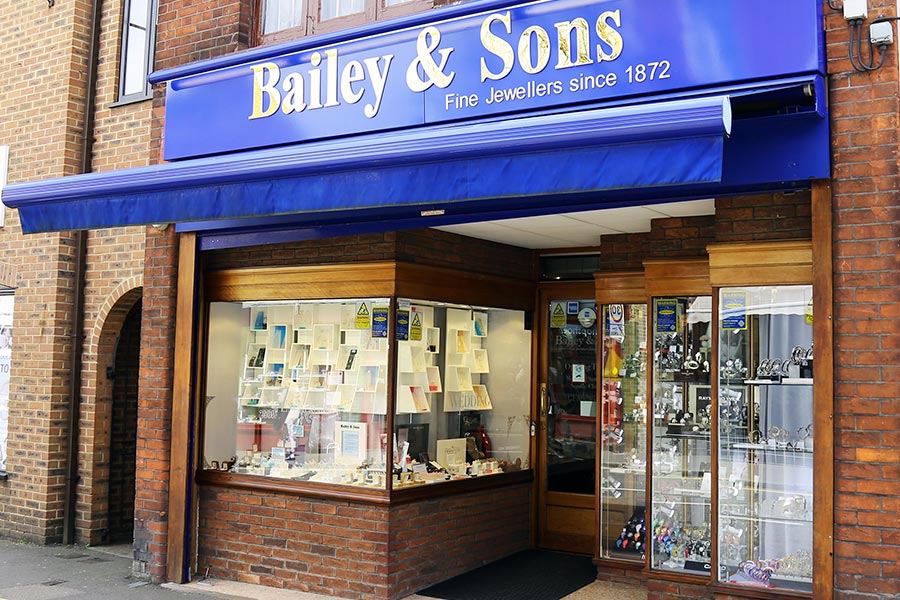 Charlotte joined the business at 16, making Bailey & Sons a fourth-generation family business. She went on to study the Professional Jewellers’ Diploma 1 & 2 and learnt a lot from her Father Nigel. 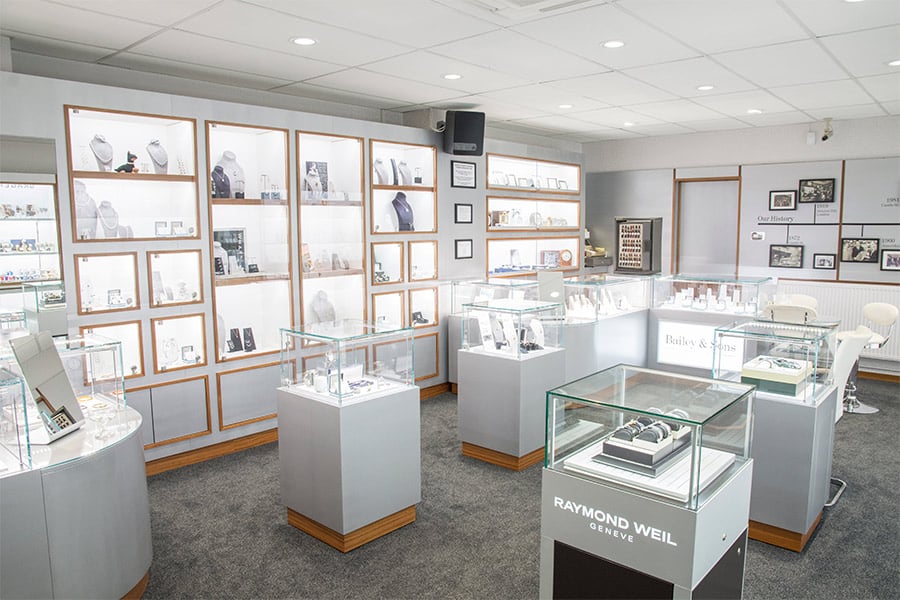 To mark Nigel’s retirement, Bailey & Sons had a refurbishment to open up the stores browsing areas. The colour theme changed to a Silver & light blue and the beautiful stock was now so diverse as Charlotte spent a lot of time visiting shows and seeing suppliers from all over the world.